Blog / Teaching Ideas » What Are the Difficulties When Teaching EFL in Kindergarten in Asia?

What Are the Difficulties When Teaching EFL in Kindergarten in Asia?

As an international language that is widely used around the globe, English has been important and increasingly influential in our lives over the years. Learning English seems to be an inevitable, prioritized task for many of us. This is also applicable to kindergarten children aged 4 to 6 years in many Asian countries. As a former kindergarten teacher who taught English, I have encountered several problems during my time teaching kindergarten kids in Asia. These problems could be attributed to child development and their social environment.

This post was written by our TEFL certification graduate Wei L. Please note that this blog post might not necessarily represent the beliefs or opinions of ITTT.

Kindergarten children are kids below 6 years old. In almost every case, children at this age are not intrinsically motivated to learn English, it could be worse if English is not their first language. Other than the low level of motivation, kindergarten children tend to have a shorter attention span and are easily bored. The difficulty in understanding a foreign language sometimes will make it harder for children to pay attention to. Besides, drilling can be ineffective, as children get bored from repetitive actions. Also, kindergarten kids are at the stage where their fine motor skills are still developing. During the Study phase, students are sometimes required to reproduce the words by repetitively writing the words. For some students, this can be a challenging task, as some of them may even have difficulties with holding a pencil. Also, speech development in young children could be another challenge in teaching these children. For instance, in most Asia contexts, it is extremely hard to pronounce the “th” sound. Asian kindergarten kids often have trouble differentiating the “l” and “r”, “m” and “n”. These are some issues that I observed that could be attributed to child development. However, there are some other difficulties caused by the social environment.

At this age, children have difficulties even while learning their mother tongue. During this process of teaching kindergarten kids, visual aids are always needed. To motivate children, sometimes videos are used. However, most of the teaching materials are produced by Western experts, which may cause some issues. The accent shown in videos may sound different from the teacher’s accent, and this could confuse children. Also, some things can be easily understood by American kids but not Asian kids. For instance, cereal is consumed by American kids on an almost daily basis, but some of their Asian counterparts probably have not even seen it, as it is not part of their culture. Moreover, to children at this stage of development, the concept of past, present, and future is hard to grasp; while in some Asian contexts, this concept is almost non-existent. Hence, this would be another difficulty in teaching English as a foreign language in kindergarten in Asia.

Also Read: The Top Travel Apps to Use While Traveling In Italy

Furthermore, Asian young children have limited exposure to the language English, as some of their parents may not be competent English users as well. Unlike learners of other ages, most of the time kindergarten children are only exposed to school and home. In school, English is only a subject that they will spend less than two hours a day learning. At home, most likely these children will only use their mother tongue when communicating with members of the families. Many parents will opt for TV programs to increase exposure to English, however, as above mentioned, these shows are often produced by Western filmmakers and the accents may sound different.

Despite all of these difficulties mentioned, teaching kindergarten children in Asia is a fruitful journey, as it gives a huge sense of achievement when together with the students, you overcome these issues. Seeing students learn the language in the face of these challenges is truly rewarding. However, this journey would be smoother if these difficulties can be minimized or eliminated. 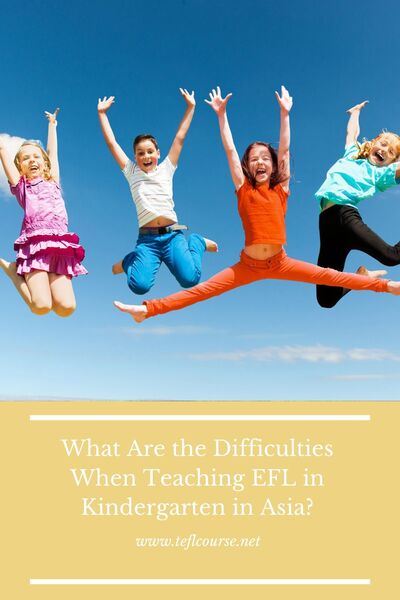