Nepotism in the Education Sector 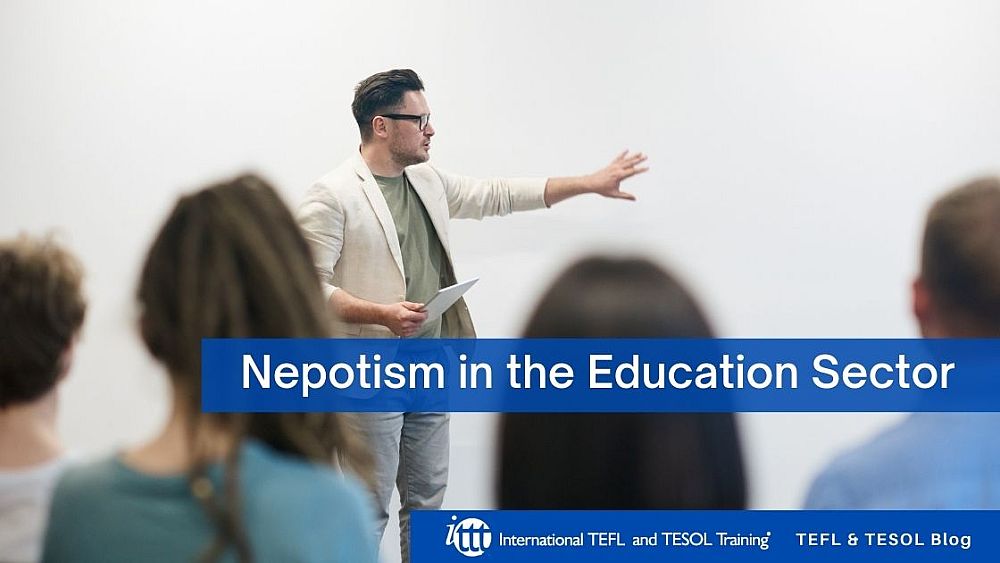 Nepotism, known as “wasta” in the workplace, is common in the Middle East, especially in the private sector. Personally, this area of common practice was unknown and unheard of to me as I come from a system of being recruited through the normal steps of applying for a job, being selected for an interview, and then being hired based on my experience knowledge, and skills.

The normal practice of hiring a candidate based on their knowledge, skills, and experience matching the vacant job position available does occur in the Middle East, but not at the level it should be. It is shocking to witness the level of nepotism that still exists, especially in the education sector, which is increasing daily. This practice has a negative and detrimental impact on the students learning motivation and largely affects the quality of education provided and standards educators set for themselves.

Students would voice their opinions and concerns of not being able to find a job as all the jobs are given to friends of friends, and “If you know someone in a company, etc., then your chances of getting a job are higher.” They were feeling hopeless and were not motivated to study as they saw a bleak future. Somehow, I tried to convince them and believed genuinely that this practice was no longer occurring at a large scale and could see that slowly there was a reform in this area as the Government had pledged to do more in this aspect, and in various sectors, the hiring process has been based fairly on an individual’s skills and qualifications.

Despite some efforts to combat nepotism and ensure only qualified personnel are hired in the education sector, it seems that the bigger the company or educational establishment becomes, the more nepotism increases and occurs. As a consequence, people are not thinking of doing their best but merely of securing their positions at the workplace. Their performance standard is lowered, and they are non-committal to their job. Students pick up on this, and the quality of education does not match what the students are paying for. Also, in the education sector, students take advantage of this because they may feel they can get favors done by those whom they may have connections with in regards to passing, favorable treatment in class, and opportunities.

This type of hiring of personnel creates a false working environment because there is a lack of trust and resentment amongst those who have been hired upon their own merits versus someone who is hired due to personal connections and thus, leading to bad decision-making and unfair treatment. Also, amongst personnel, there is a lack of confidence and appreciation due to them being treated differently and paid according to preferential treatment, which results in a lack of motivation and disconnected loyalty.

A cultural mindset develops of those in the company who have relations with the owners, and it is exactly those types of people that cause and a hindrance to the progress of the education sector as decisions are based on a personal perspective and start to influence the hiring process. Further, individuals carry on with the mindset that they are ‘untouchable’ and free to do and behave as they like because somehow they have the protection of this connection. This is a disturbing reality that serves no purpose in the education sector. Is there room for this type of mentality in education? ‘No’ should be the answer as this type of thinking is extremely harmful to building a nation of future leaders, role models, and experts in the community.

Unfortunately, the students are the victims here because if someone cannot teach well, but they have signed the contract for a year, it means the student has to deal with that. Also, those hired at such places are victims because they end up succumbing to that environment since no one talks and raises their voice openly and publicly as they fear they will be ousted or they are not seen to be part of the ‘gang’ of self-interest, or due to personal economic factors, they are forced to stay quiet and just get on with it.

For such reasons, there is no point in having policies and rules if they are going to be ignored, and due to personal connections, everyone is doing as they like and please. Also, there is a greater cover-up and leaving everything as it is so as not to rock the boat. Ultimately, it means there is no real, wholeheartedly interest to develop the education system. A place cannot develop to a high and international standard if there is no collective effort.

Not only does this have a grave negative impact upon educators and staff working in such an environment, but it also has an impact on the way students take advantage of the situation and do not take responsibility for their learning journey. They rely on connections and family to get their way, in terms of bypassing entrance exams and preferential treatment in grading, etc.

The responsibility lies upon the management of those big companies or universities to remove or at least change the status quo of those who believe that they are paying, so they should be able to dictate the type of education provided. Education has become a big business, and whilst customer satisfaction is important, but to what extent should it be at the cost of standards, policies, and the primary purpose of education?

Time for a Reform

The Ministry of Higher Education and Scientific Research, Abdul Razzaq Al-Issa, who was in office from 2016 to 2018, showed his efforts to deal with such issues:

“I did not accept exceptions,” he said. “I clung to my independence in the face of pressure… …because I took an obligation on myself to preserve the independence and quality of higher education.”

Educational establishments have the responsibility to ensure they are hiring people of a high professional standard and not to cut corners just because it is the Middle East and ‘no one cares’ or ‘it is the way it is because the owners can do as they please due to their wealth. Education is not a bargaining tool, and the quality and standard should not be jeopardized at all costs. Therefore there should be regular audits in this regard from the Ministry of Education and Higher Education. Also, the Ministry of Labor should set clear guidelines as the minimum and maximum salary so as for individuals not to be paid at different rates due to personal preference and connections. Stricter and stringent accreditation and monitoring should be in place to ensure the quality of education is not compromised due to personal motives.

Without serious reform, the level of education can never improve in such environments.