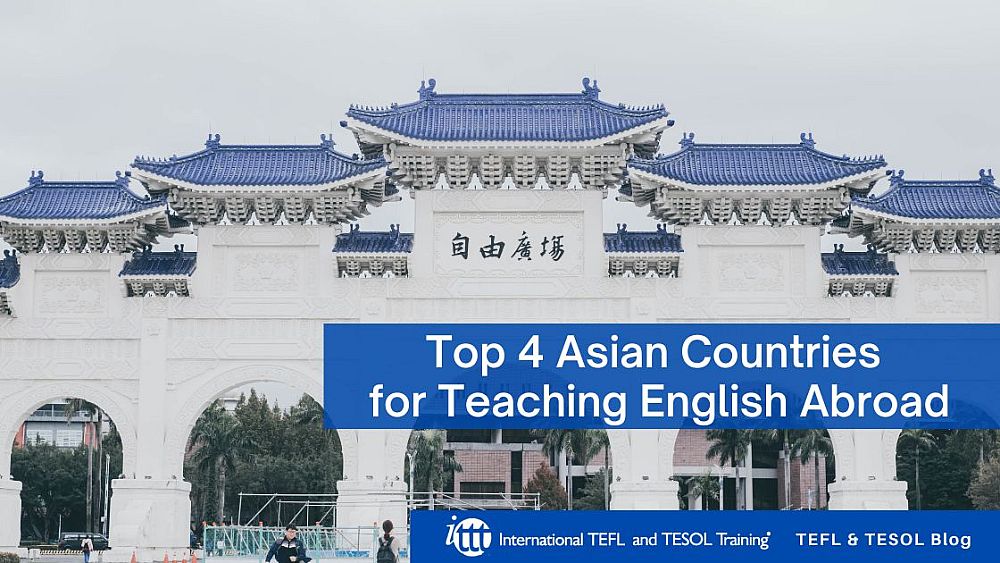 Mainland China and Taiwan form a very large part of the Asian ESL market. There are obviously many similarities but also many differences. In this blog we will look at some of the major differences in job requirement in these two regions.

Watch the video about this topic

It is said that there were around 100,000 foreign teachers working in China until recently, so that's a huge number. China is a vast country with huge demand for EFL teachers. There are opportunities at public schools, kindergartens, boarding schools, universities and international schools.

However recent regulations have changed the Chinese EFL market drastically, so it's not as easy to find work as it used to be. Basically the government has placed some new regulations that make it a little bit harder to teach English in China, specifically for online platforms. They are still hiring for in-person requirements but the changes are still in the early stages, so you need to read the latest material and stay up to date with what's happening in China. It is still a great option if you're interested in going there; salaries are in the range of US$1,000 to US$2,500 a month. Many jobs include great benefits like free accommodation paid airfare and an end of contract bonus.

For the highest paying jobs, requirements include a bachelor's degree, two years of teaching experience (teaching related work experience could also be considered) and you will also need a TEFL certificate of at least 120 hours to be able to teach in China.

To find a job in China there are recruitment companies, online job boards and other teaching related websites. One example is English First, another is Teach Abroad and these sites are good if you want to find a teaching job in China. Also there are many different Face book groups that you can check. There are Face book groups for everything, for example, when a teacher leaves a school, they would post the vacant job for someone to take over. So you find a lot of posts like that and just by networking you can find out how the current employment situation is.

A good alternative to teaching on China’s mainland is Taiwan, because the culture is similar it's in a very similar region so if mainland China might not be great for you right now maybe you can consider Taiwan. The demand in Taiwan is pretty good for English teachers and the government there announced that they have a very ambitious plan to make the country bilingual that is Chinese and English by 2030.

In order to meet this target, they are hiring many English teachers at the moment. It is a great place to be an English teacher and as a certified teacher you would most likely be working in private language schools. There are relatively few public language schools but this might also change with some new government-funded programs.

Taiwan may also introduce their own English Program, because there are a couple of other countries in the region like Korea which has the Epic program and Japan which has the JET program for example. Hong Kong has the NET schemes those are all government funded programs. Salary for ESL teachers in Taiwan is typically between 1,500 and 3,000 US dollars a month and here you also get paid airfare paid housing endless contract bonuses.

You need to be over 20 years old and you also need to be a native English speaker, with a passport from an ‘English as the first language speaking country’. You need a University degree that is a three or four-year degree in any subject, although if you have a bachelor's in English or in teaching that's a huge bonus. For job hunting it's all similar to China, with recruitment companies and online job boards. Some of the best for Taiwan include, Dave's ESL Cafe and Careerjet (https://www.careerjet.com.tw/).

Japan has been a very popular teaching destination for a long time and the demand for EFL teachers is also still very high. If you decide to teach English in Japan you will most likely be working as an assistant language teacher in a public school, or as an English conversation teacher in a private Language Academy. Those are the two biggest job titles available in Japan for teaching English. Salary and benefits are also really quite good; you have some of the highest salaries in Asia, typically between two thousand and six thousand US dollars a month, but also keep in mind that the cost of living is also among the highest in the region. In Japan, contracts often have paid airfares, housing, health insurance and a contract completion bonus. You need to have a degree, in any subject so it doesn't have to be English, it doesn't have to be teaching, any subject is fine but you need to be fluent in the English language. This is a great opportunity for anyone, Native and non-native English teachers. For job hunting you should either contact recruitment companies or online job boards. There's also the JET program which is the Japan exchange and teaching program, that's the government funded program that places English teachers into public schools, the hiring for 2022 is already finished.

The demand for ESL teachers is pretty good and you will most likely either be working in a public school or a private school, so there are opportunities for both. For public schools you should look at the EPIK program which stands for, English Program In Korea. The EPIK program is similar to The JET program in Japan, and it places English teachers into public schools in Korea. Salary and benefits for South Korea are among the highest in the region so between 1,600 to 2,400 US Dollars a month and also here you have paid airfare, paid housing, pension scheme and end of contract bonuses. Requirements are different to those of Japan. You need a degree in any subject, a TEFL certificate and you need to have a passport of certain English-speaking countries. Those are Canada, UK, Ireland, South Africa, USA, New Zealand and Australia. You need to have a passport from one of those seven countries to be eligible to teach in Korea. If you already have a visa that allows you to work in Korea, you can also be a non-native speaker to apply for teaching work. For job hunting, again recruitment companies, online job boards, the EPIK program and there are these four websites that are really good for finding jobs in Korea, Dave’s ESL cafe Korea Bridge, Gone to Korea and The WorknPlay.