How Learning a Second Language is Different from the First

By the time a child is a year old, they can differentiate between the sounds that make up their first language but can’t distinguish between sounds that aren’t found in their first language. Even in the case of sounds that children may not be able to correctly produce until they are six years old, such as the /r/ sound. So, it would make sense that by the time a child is just a year old the way they learn language changes, as stated in Dr. Ryalls’ class. Further on when a child is finally in school they have some grasp of grammar, even if it isn’t complete by the time the child is school-aged. This means that by the time a child is in school when they would most likely start learning a language, they already have to contend with the differences in the grammar of their first language and the grammar of their second language. Often that means that children who are in the process of learning a second language are referred to a speech-language pathologist, even though they don’t need speech therapy, they just need more assistance learning their second language.

*This post was written by our TEFL certification graduate Kelsey R. Please note that this blog post might not necessarily represent the beliefs or opinions of ITTT.

Ways of Acquiring the First Language

Children learn their first language immersed in it, and while they may learn their second language via immersion – or at least immersion so total and complete as the immersion children experience in their first language – it’s a situation that’s unlikely to be encountered in the classroom setting. At the very least the other students may speak the same language as one another, giving them the crutch of their language. More than that though when the student leaves the classroom they’re unlikely to continue speaking and hearing English unless the student is an exchange student in an English-speaking country. 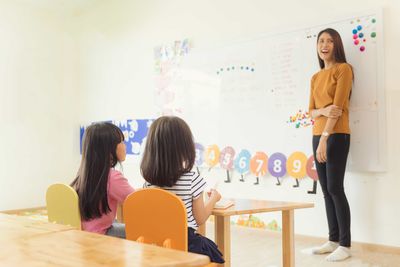 A teacher needs to be able to maximize the time that they do have with their students, focus on all parts of a language, rather than focusing on one element at a time. A student writing a word out will also help them with their reading, their pronunciation if the teacher has them say it out loud as they write. If the teacher writes the words on the board and then goes through how each part of the word is pronounced it allows them to practice pronunciation and reading. Those techniques wouldn’t help a baby learn a language, but it does allow for the most effective use of the limited time, (Foppoli).

There are some similarities though. As discussed in Mrs. Phillips’ Language Development lecture, babies don’t learn the rules of their language, they learn the language itself. It would also be wholly ineffective for a teacher to sit their students down and try to teach them to be able to identify the difference between a present continuous verb and a present continuous perfect verb. Those sorts of things are taught to children long after they’ve mastered how to use those tenses in communications and focusing on the minutiae of the language only delays their competence in using the language, which is the goal of all but the highest English classes.