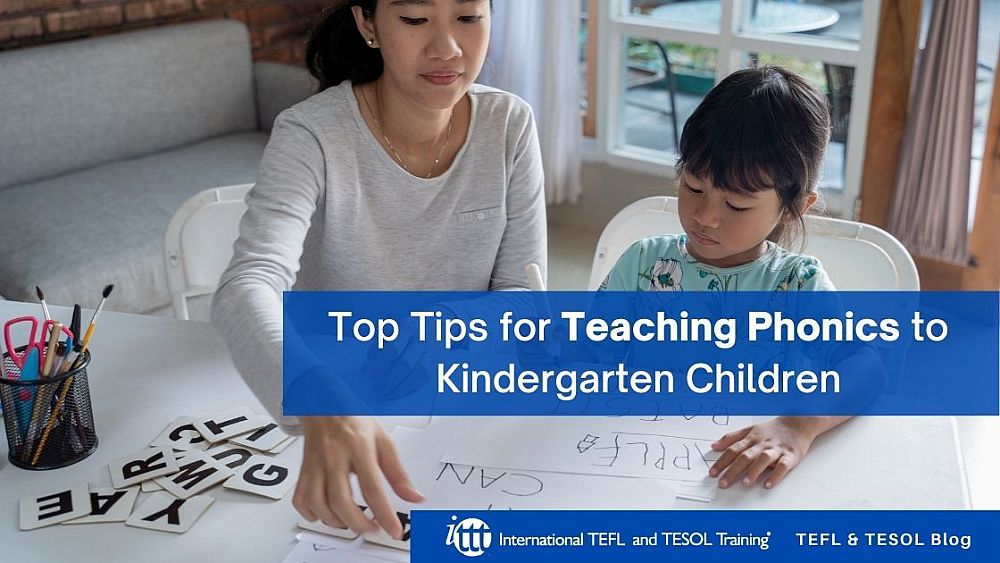 Phonics is a method of teaching children to read by linking sounds (phonemes) and the symbols that represent them (graphemes, or letter groups). Phonics is very commonly used in Hong Kong's kindergarten to teach children the sound of the words. It involves matching the sounds of spoken English with individual letters or groups of letters. For example, the sound k can be spelled as c, k, ck or ch.

Teach children the letters' sounds. They think about what sound a word starts with, saying the sound out, and recognize how that sound is connected to the letter. It helps them to see a letter and then say the sound it represents out loud. Decoding is basically the main English curriculum for K1 children in kindergarten, around age three. It is the first step to prepare them to understand the sound of the words. There are a lot of decoding phonics games to play within the classroom, for example:

Trace and Say : use a finger to trace a letter while saying the letter's sound. You can trace on paper, in sand, or on a plate of sugar.

To practice blending, children need to go from saying the individual sounds of each letter, to being able to blend the sounds and say the whole word. They will learn to look at a short word, such as 'tin', and rather than paying three separate sounds, 't', 'i', 'n', link the sounds together and say the whole world in one go. Blending is usually used to teach children in K2 (age 4) or above as this can be a big step for many children and takes time. To teach blending to the kids, you can try practicing with visuals help. For instance, draw three boxes and they have to touch each box as they say a sound in a word, and then blend the sounds together. The other way is to create dots & arrow. Draw three dots and an arrow below the dots. They touch a dot as they say each sound, and then slide their finger along the arrow to blend. Try with 2 sounds first for K2 , such as "at, in, on, up,etc" and then once they are ready, start teaching with 3 sounds like "tin, can, mug ,etc."

There are quite a few phonics teaching systems for teachers and parents to teach the children. One famous system is "Letterland", which I used in my school. Letterland is a phonics-based approach to teaching reading, writing and spelling to 3-8 year old. The Letterland characters are designed with cartoons, and they all live in an imaginary place called Letterland. I will follow the Letterland system by starting with a story about the Letterland characters. In the story, there are a lot of cartoon pictures and objects related to the sound. For example, in chapter Annie apple, we can find apple trees, ants and axes in the picture. These stories explain letter sounds and shapes, help them to prepare for word building, reading and writing.

After a story, each letter followed with a song. The song is easy to remember and it is all related to the main cartoon character, and the sound of the words, for example one lyric in the song Annie apple is : Annie apple she says 'a', 'a' is the sound and when they sing the song, children can easily connect the sound with the letter A.

The other famous phonics system is Jolly Phonics. This is very popular in primary school students teaching letter sounds as opposed to the alphabet. Children are taught 42 letter sounds, which is a mix of alphabet sounds (1 sound – 1 letter) and digraphs (1 sound – 2 letters) such as sh, th, ai, and ue. Same as above, Jolly Phonics also use a multi-sensory approach to each letter by using fun actions, stories, and songs.

If you are interested, please take a look at the website below and check out how to prepare phonics teaching!

Are you ready to teach English online?